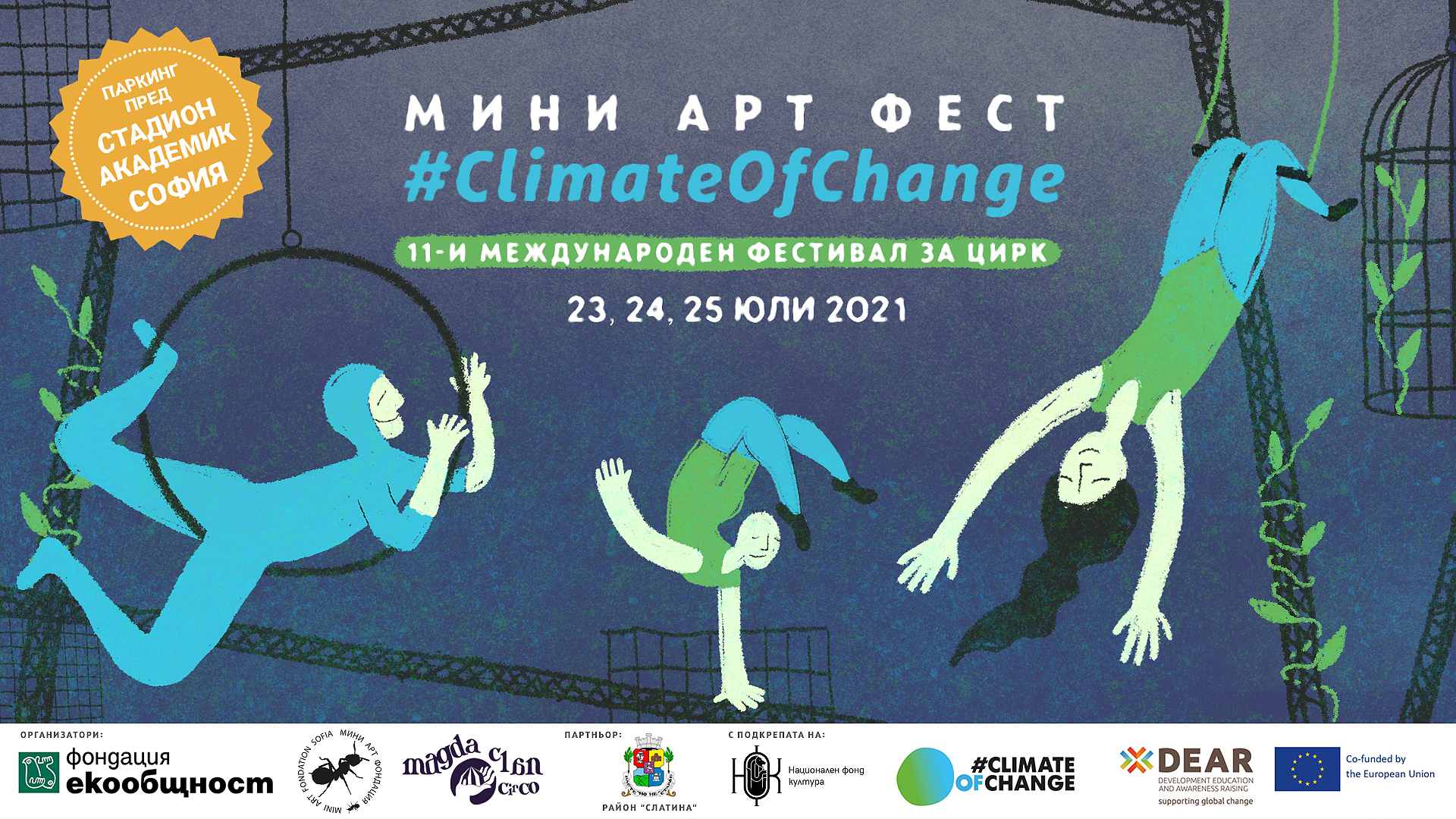 The first stop of the pan-European tour of the MagdaClan Circus artists is in Sofia, as part of the program of Mini Art Fest 11, which takes place on July 23, 24 and 25 in the parking lot in front of the Academic Stadium, opposite Geo Milev Park. . Admission is free!

Seven circus performers, acrobats, four musicians, impressive scenery and stage, and many stories to tell. These are just some of the figures describing the contemporary open-air circus show “WeLand”, which will invade 10 European cities this summer, as part of #ClimateOfChange – a communication campaign of the Italian organization WeWorld and 15 other European partners aimed at informing young people on the link between climate change and climate migration.

In Bulgaria, the event is organized under the auspices of the 11th edition of Mini Art Fest,

and forces unite the EcoCommunity Foundation and the Mini Art Foundation to create an art magic and motivating messages for our role in nature conservation.

On July 23, 24 and 25 in the parking lot in front of the Academic Stadium in Sofia you will have the opportunity to visit circus workshops, numerous performances and art installations, and the focus of the program is on July 24 and 25 from 20:00 with the show “WeLand” of MagdaClan Circus from Italy. Admission to all activities and performances is FREE

“WeLand” is a contemporary circus, aerial acrobatics and live music on a portable large-scale stage, part of the scenography of the show.
The main message is climate change and the image of the entire human population, those suffering from disasters, floods, melting ice, desertification and fires. The show makes us think about the little things and provokes us to become part of the global impact of improving the climate by changing our thinking, behaviour and attitude.

“The ecological crisis is a crisis of modern society, which requires action and changes in our way of life,” said Lyubomira Kolcheva, director of the EcoCommunity Foundation (ЕкоОбщност). “We are pleased that the efforts of our Italian partners have led to the successful involvement of people from the art world in this campaign, so that together we can convey the message of climate change in an accessible and attractive way, small and large – through the modern circus. Climate change has a strong impact on all of us.
Art helps us understand the scale and place of each person in change and motivates us to be a part of it.

The play is directed by
Peter Forman

who fascinatingly uses full-blooded human images to convey a shocking message; behind the dramaturgy is Flavio D’Andrea, and the scenography is by Francesco Fasone. We will land in a port, docks, ships, huge warehouses and the global market. “We want to create a symbolic context in which people recognize their daily lives and in which viewers are invited to consider how to accept, reject or fight our attitude of treating everything as a commodity, thus organizing our world on ruthless economic rules that cause major problems related to climate change,
”says set designer Francesco Fasone.

will also include a one-woman show by Galina Ryom-Røjbek (contemporary circus artists and unicyclist) better known from the
2021 “Bulgarian Searching for Talents” TV show (Watch here her | Audition |), the Shizi Impro Theater, a fire show by Palyachi from Varna
and will provide an opportunity for dialogue and debate on climate change next to many circus workshops.
Be part of the change!

#ClimateOfChange is a pan-European communication campaign run by the Italian organization WeWorld and co-funded by the European Commission under the DEAR program, which aims to raise awareness of young EU citizens about the link between climate change and migration and get them moving, ready not only to change its way of life, but also to support global climate justice policies.

16 European civil society organizations and universities have joined forces to achieve this goal. Since 2020, they have been working together, conducting research and field research, debates in schools and universities and a broad European awareness-raising communication campaign to reach the millions of young people aged 16 to 35 in 23 Member States. of the EU.

You can learn more at https://climateofchange.info/